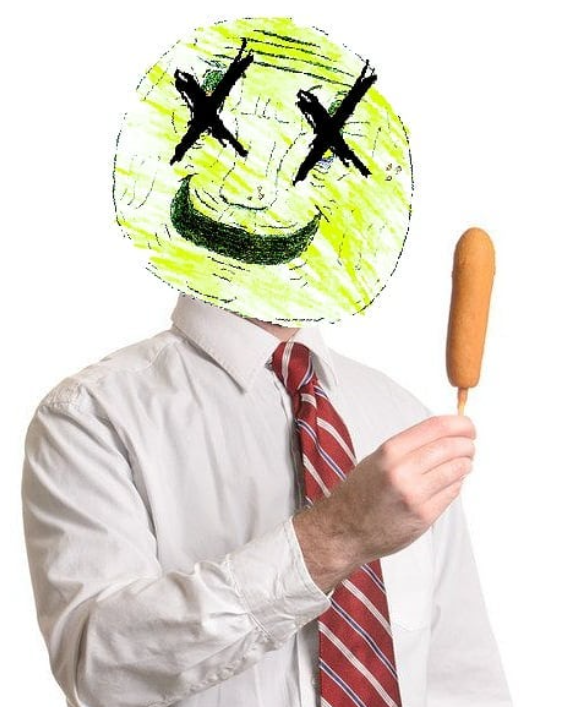 Darren Elsietanner Smiley was not a nice man – on the contrary, his misadventures and misdeeds are numerous and well-documented. From stealing his neighbour’s antihistamines and filling her house with cats to being banned on individual occasions from contacting every member of 5IVE, all the while somehow avoiding jail, Darren was a… complex character. Nevertheless, it’s sad when people die, even if they are less ‘people’ and more ‘conceptual motifs’. We mourn him appropriately, as we would a goldfish or a lost shoe on a wet day.
We first met Darren outside Stalybridge train station, where he was eagerly snarfing down a tray of Donner Meat and Chips. Without prompting, he told us it was his third portion in a row. After a brief and unwanted chat in which he discovered we were a band he offered to manage us, which we politely declined. This was our only face-to-face meeting with Darren who for the last 6 months has repeatedly taken over our social media platforms and assumed numerous promotional duties for our debut EP ENDLESS UNSTOPPABLE PAIN which, incidentally, is still available to stream on all platforms. We don’t know how he did this. He had no passwords, he is not an admin on any of our accounts, I don’t even think he knew what social media is. He just did it. It caused us a great deal of distress, but he did it anyway. That was our Darren.
Darren was known for his firebrand political activism and died as he lived – shouting anti-vaxx slogans through a megaphone at passers-by outside a primary school. While doing this he fell face-first into a puddle and drowned, a situation brought about by his lack of arms, legs or body. He would have wanted it that way. He was also a keen Capri-Sun drinker and consumed it in copious amounts, using it to fill the void in his soul where some unknown pleasure once dwelled. His main passion in life was the unprovoked harassment of low-level celebrities, and before he met us he mainly filled his days sending threatening letters to various former Big Brother contestants, shopping channel hosts and any other such person who, for reasons best known to Darren himself, drew his relentless ire. He was a complex man.
Darren Smiley leaves behind only an estranged son whom we have been unable to trace, which is the reason we’re doing this obituary instead of literally anyone else. Darren often referred to his son in his letters as ‘that mustard boy’ and repeatedly said he wanted nothing to do with someone who ‘reeks of Dijon’. We don’t know what that means, but not having a name for the junior Smiley made it hard to trace him, or indeed know if he was real. So here we are.
Darren was malevolent, mean-spirited, intensely obsessive and cruel. And yet, we will miss him. Our time in his crosshairs was ultimately enjoyable and he admittedly did his job as an aesthetic centrepiece well. In a roundabout way, he leaves the world a richer place than it was before he arrived. Isn’t that what we all want in the end?
So yeah, let’s raise a toast to the Hate Machine himself. Thanks for nothing.
Right, now that that’s over with, let the march begin…

ENDLESS UNSTOPPABLE TUNEZ IS BACK, BABY!!! I know it’s been hard. You’ve been lost, haven’t you? Without this venerable blog to make your tastes, where do you go? What do you do? Listen to your old records? Whatever, loser! You do that while the cool kids read our sweet recommendations blog and discover what music I didn’t know about that they already did.
Na, all jokes aside, apologies for being quiet on the auld bloggo the last few weeks. We said ENDLESS UNSTOPPABLE TUNEZ in particular was going to be a weekly do but, as so often happens, life gets in the way. Nevertheless, we’re back on the scene and keeping it keen with some hot stuff recommendations. As ever, this isn’t necessarily a new music blog, just a blog of music I hadn’t heard 7 days ago. That said, it’s been a few weeks so I’m bending the rules a bit this time and including stuff I heard up to 3 weeks ago like an absolute MADMAN. Let us begin…

Cold Water Swimmers – So Young
Anyone who knows us knows Cold Water Swimmers are great pals of ours. Anyone who knows us also knows there’s no room for nepotism on this blog! ‘So Young’ is the new single from Manchester’s male-fronted tune machine and it sees them further explore the breezy, glistening Guitar-Pop territory they first traversed last summer with the gorgeous ‘Be My Sunshine’. CWS do stuff like this gloriously well. There’s a real heartfelt tenderness running through the veins of ‘So Young’, with shimmering-yet-jerky acoustic guitar providing a glittering base to a soaring riff that sounds like a fresh breath of mountain air, all undercut with urgent, stripped-back drums. A call-and-response vocal provides an endearing element of sweetness, overall making for an insistent, affecting earworm of a number. It marks another fine milestone in the evolution of a band who keep throwing up surprises and stokes the flames of excitement for their forthcoming debut album. CWS are a band of many shades – deceptively complex, defiantly honest and constantly surprising. Listen to this and be warmed. It’s a real stunnah.
Facebook – @coldwaterswimmers
Instagram – @coldwaterswimmers
Twitter – @coldH20swimmers

FilthyDirty – Straight to Hell
For those unfamiliar (Bensplain alert), FilthyDirty is the sleazy, lascivious, irresistible frontman of Preston’s own masked bass monsters Evil Blizzard. Fans of ours will know just what an influence Evil Blizzard have been on our sound, particularly on our earliest releases like 97/91. With the news arriving of auld Filthy’s debut solo album anticipation on the Farm was rife. The album’s lead single offers a tantalising, sickening taste of the nightmare to come.
‘Straight to Hell’ pulses with menace. Malevolent, hypnotic bass and drums drive forward a track that builds slowly throughout, unfurling gradually to reveal a hellscape of ferocious, whirling guitars. It is a masterfully arranged track made all the more unsettling by Filthy’s vocal, which crackles with dark wit, sidling right up to your ear and straining to purr into your soul. Stoic in the face of the flames that surround it. Yeah, basically, I fucking love this track and can’t wait for the album. Offshoots of Evil Blizzard have generally been amazing (check out Singer/Drummer Side’s other project One Sided Horse) and FilthyDirty’s debut looks set to add to a grand canon.
Facebook – @evilblizzard
Instragram – @evil_blizzard
Twitter – @oneofevilblizz or @evilupdates

Wu-Lu feat. Lex Amor – South
This might genuinely be the track of the year so far. Dark, visceral and uncompromising, ‘South’ begins with a catatonic acoustic guitar riff looped over a gigantic, Chemical Brothers-esque beat that conjures a powerful intensity. The track simmers and seethes, with Wu-Lu’s vocal lingering with bad intentions, hovering like a kestrel waiting to attack. The arrangement builds and builds, turning up the tension to an unbearable degree. Once the attack happens, the song explodes in full colour with an absolute monster of a chorus – a primal, pained, outraged scream that rages in the face of the corrupt power structures that keep us subjugated and separated. This is a vital, magnificent piece of work. ‘South’ ends with a laconic verse from Lex Amor that provides a stunning contrast to the intensity of the rest of the track. A Staggering piece of work.
Facebook: @wulumusic
Instagram: @wulumusic
Twitter: @wulumusic

Benefits – Flag
Benefits are the most important band in the country right now and Flag is another example of why that is the case. A startling, raw, despairing fightback against the statue-shaggers, the poisoners, liars, killers, Brexit fetishists, destroyers and cowards in power. A devastatingly articulate dissection of performative patriotism and toxic nationalism that is the most succinct, righteous explicit address of the state of things I’ve heard – ‘this place stinks of old wars, subservience, semi-final defeats, god and flags’. This is a genuinely breath-taking song from a band who radiate power. Where other ‘political punk’ bands have failed resolutely to step up to the plate in the face of the carnage this country has wrought on itself, Benefits are as real as it gets. Flag marks a watershed moment for them, putting them alongside Sleaford Mods and Bob Vylan as the most perceptive, effective, vital documenters of the misery that is Britain’s slow slide into Fascism. Incredible. 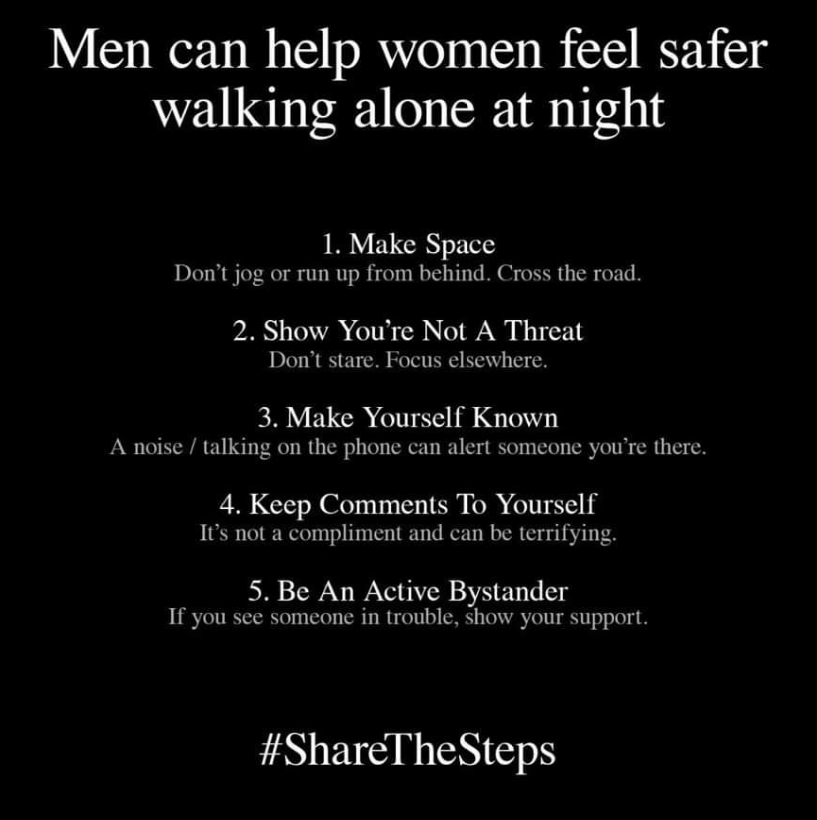 Yeah. It’s been tough to know what to say…

I promised a follow-up to our last blog a couple of weeks ago but the rigours of early-stage parenthood and some shitty personal news left me not feeling much like writing another. I finally dredged up the energy to pick the blog up a couple of weeks ago. Then Sarah Everard’s murder happened. Then Clapham Common happened. Then the Policing Bill happened. All the sewage in the male psyche laid bare. All the twisted, sick priorities of the state laid bare. The stark, brutal, horrific reminder that everything is not OK. Suddenly it didn’t feel like the time to write a blog about 90s nostalgia.

Instead of writing a lengthy blog on this I thought I’d use this platform, small as it is, to direct people to educational resources run by women and hopefully help make clear what women face on a horrifyingly regular basis. I’ve also included some charities and crowdfunds to look into and donate to if you can and some organisations fighting for justice and equality for female-identifying people in all walks of life. Now is not the time for male perspectives. I hope you find the below resources useful.

Man Walks Into a Bar by Tyrone Lewis – https://tyronelewis22.com/poetry/man-walks-into-a-bar/

‘Without the right to protest women have everything to lose – the Sarah Everard vigil proved why’: The i article by Sisters Uncut – https://inews.co.uk/opinion/women-right-protest-policing-crime-bill-sarah-everard-vigil-914008

‘What happened to me was nothing – the nothing women know all too well’ by Marina Hyde – https://www.theguardian.com/commentisfree/2021/mar/12/what-happened-women-uk-harassed-street

There are obviously countless resources you can read and access. These are just a few that I found useful as a start. Thank you for reading.